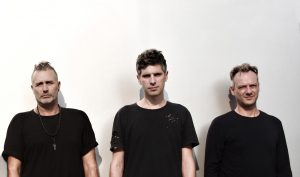 The group was born from the merger between the old formation of the Neapolitans Souled Out (Alessandro Sommella, Domenico “GG” Canu and Sergio Della Monica) and the Sarzanesi Kamasutra, that is Marco Baroni and Alex Neri.

The group’s first success comes at the end of 2000 with Chase The Sun, sung by Finnish Auli Kokko , which takes up the melody of “In the light of day”, composed in 1969 by Ennio Morricone for the soundtrack of the film Metti, one evening for dinner . The song was included in the Hit Mania Dance 2001 compilation and also achieved excellent results abroad , reaching fifth position in the UK’s best-selling singles chart in February 2001.

In the spring of 2001 Inside all the People was released, sung by the Englishman Dan Black, with whom Planet Funk formed a lucky partnership. While not having the same success as Chase the Sun, the song contributes to making the group known even more, which is invited to perform at the Italian Dance Award that year, held on 11 December at the Alcatraz club in Milan and broadcast on Italia 1 .

In 2002 Non Zero Sumness was released, the band’s first album which contains, in addition to the singles already released up to then, the singles Who Said and The Switch, with which the group participates in the Festivalbar. In the same year the group won the Italian Music Awards in the categories “Best Italian group” and “Best Italian revelation” and the album obtained the gold record  both in the original edition and in the reissued Non zero sumness plus one, which contains a new song (One Step Closer) made in collaboration with Simple Minds.

In 2003 Planet Funk performed at the ExtraFestival in Turin together with Underworld  and at Coca-Cola Live MTV together with Alex Britti and Negramaro .

Dissolved the partnership with Dan Black, who leaves to concentrate on his group The Servant, on February 25, 2005 the group publishes Stop me , sung by the English John Graham and chosen by Coca Cola for a television commercial . The single anticipates the second album The Illogical Consequence, followed in the fall of 2006 by Static, whose homonymous single is included in the soundtrack of the FIFA 08 videogame; at the beginning of 2009 the group released the single Lemonade.

In 2011 the band recorded the new single Another Sunrise, which saw the debut of the new singer Alex Uhlmann. The song, in turn driven by its inclusion in a Hyundai TV commercial , is the first single from the album The Great Shake, released on September 20, 2011, with the participation of Giuliano Sangiorgi, leader of Negramaro, as singer in Now the world is perfect. In the same year he took part in the MTV Days in Turin.

Also in 2011, the cover of Nancy Sinatra’s song These Boots Are Made for Walkin ‘, made for the film Kryptonite in the bag by Ivan Cotroneo, was very successful. The same director also directed and wrote the official video clip of the song, in which some actors of the film appear such as Luca Zingaretti, Valeria Golino, Cristiana Capotondi and Libero De Rienzo, as well as Planet Funk themselves. The song is then chosen as the soundtrack of the commercial of the European football championship 2012.

On October 13, 2015, the single We-people was released, intended to promote Save the Children’s global campaign to combat infant mortality. The following year a new album is also announced, entitled Recall, whose release is initially scheduled for the autumn of 2017, then postponed to the spring of 2019 and finally to a later date, although to promote it the band undertakes a tour that sees the return of Dan Black.

In 2017 Planet Funk performed at the May Day Concert with Another Sunrise, Non Stop and Who Said (Stuck in the UK) and on July 14 they released the single You Can Be .

On 18 February 2018, bassist Sergio Della Monica, who had been undergoing dialysis for years and left the group a few months earlier due to the worsening of his health conditions, died at the age of 58 of pneumonia.

On December 13, 2018 Planet Funk release the new single All On Me, while on February 20, 2020 Planet Funk release 20:20, a collection that celebrates the band’s 20-year career, produced by Sergio Cerruti for Just Entertainment and remastered at Abbey Road Studios in London.