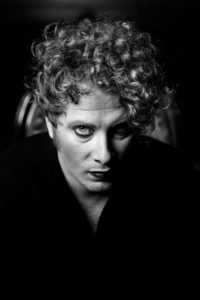 Native of  Bari (Puglia), Andrea is a key figure of the last two decades in the Dance music panorama of his region.

Dj and producer, he definitely is a person with a restless creativity, Andrea Fiorito is an artist that belongs to both old school and new school!

Since the nineties he shared the dj booth with most of the today’s legends and those experiences  brought him to develope  very unique dj skills .

Andrea’s dj set is a full immersion into the good music without prejudices; from disco to techno with a thread:the groove.

Andrea’s history is mainly chained to Bari Berlin and Ibiza for obvious reasons:music and party scene.

As label owner he runs the “infamous” Cynosure recordings  together with the imprint’s creator artist  and Andrea’s partner Mike Shannon since few years .

The Berlin based  label is gonna turn 20 in 2019 and is a reference into the swinging minimal techno/house scene,releasing music from artists as Mike Shannon,Tobias,Ricardo&Max Loderbauer,Deadbeat,Mathew Jonson,The Mole,Andrea himself and many others.

Partywise the label is very active in Berlin hosting since few years the party Electric marmalade shake @Club Der Visionaere and many other events.

Andrea released music under his name and other aliases starting in 2008 on few interesting labels like Cynosure,Tartlet,Barraca Music,Get Physical,Brouqade and a couple of nameless  imprints and projects we can not mention….

Fiorito is also a successful promoter. We have to mention his legendary “Soul Club” in Bari;

the “place to be” for all music lovers and clubbers in Bari until the location was transformed into a Casinò just recently. He is the musical mind behind Gipsyland,an open air party that last edition gained over 9k persons in the southern area of Puglia. The “Gipsies” took always care about all the art forms that’s why in the Gipsy town everything is possible;different music stages,dozens of live performances,Theatre,typical Puglia’s food,market areas and Luna Park.

He invited to join his dj booth some of the Detroit’s all time legends like Underground resistance,Derrick May,Delano Smith,Rolando and Mike Huckaby  but not only…Zip,Sonja Moonear,”The Chicago legend Gene Hunt” and many many other talents including live bands and orchestras since 2009 till now